Our Centenary celebrations are starting to kick off this weekend, first with HockeyFest – the chance for children and parents to get in to our amazing sport. 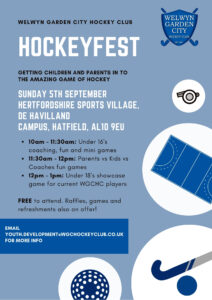 We are delighted to announce the new sponsor for our centenary year as Affinity Water, who are promoting their water-saving campaign, SOS: Save Our Streams. They have provided our club with over 100 adult and junior new home team kits, and we’d like the club members to support their campaign by spreading the word and all doing our bit to waste less water.

If you haven’t done so, please take 5 mins to sign up at www.saveourstreams.co.uk where you can get free water-saving gadgets, see how much water you use vs. the national average and take water saving challenges. Thank you to everyone for getting behind this important local cause.

We are always so happy to meet and welcome new members to our Club. Whether you are an experienced player, not played since school or have never picked up a stick, we have a team to suit you!

The season doesn’t officially start until mid September but we will be training on Wednesday evenings from 4th August onwards. Please don’t hesitate to get in touch to find out more.

Who to speak to:

It is with great sadness that we announce the death of WGCHC Life Member and former President Peter Lord on 6th May aged 91.

His connection with the Club dates back to 1946 when together with Tony Warrington, Peter Willard and a few others injected new life into an ailing Club. Peter was the driving force of the team with his boundless initiatives and enthusiasm which eventually produced a thriving club with it’s own clubhouse and bar, four pitches and six Mens teams and three Ladies teams playing at King George VI Playing Fields making us a certainly a force to be reckoned with throughout the East for many years.

He was President from 1977-82 and the first Life Member and on the field was a team captain, an aggressive centre forward and a fearsome goalie.

We say farewell to a great Clubman and motivator who did so much in what was virtually a lifetime of dedication to the Club and I will miss a friend dating back to Junior School days.

We are sad to announce that Ken Webb, one of our longest serving Vice Presidents, passed away on 9th February aged 80.

Ken was a great character, excellent right winger and an amazing Club fundraiser.  His funeral took place on 9th March and the Club sends our condolences and best wishes to his family.

New and returning players are always welcome! We have a team to suit every standard. Seasons run September - March with matches on Saturdays, training on Wednesdays.

Get in touch with us